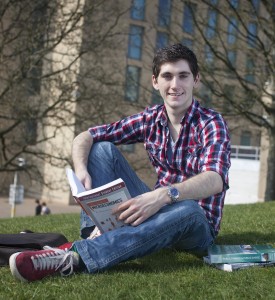 Karl on the lawns of Bath University

We asked Karl, one of our now previous scholars, to let us have his thoughts on what the scholarship meant to him personally and this was his heartfelt response…

Quite simply the scholarship changed every aspect of my life; so much so it’s impossible to imagine where I would be without it.

I still clearly remember the day that the Alumni office phoned me; and the overwhelming feeling of relief that followed: knowing that I was not only capable of going to university, but also that I was able to go to university – because the financial support now existed.

Knowing that through all my hard work; that someone, somewhere, believed in me; and that they were not only willing to, but able to support me. This scholarship has and will forever change my life.

And so it was this belief, and confidence in me; that stirred a deep sense of commitment and obligation to work at Bath.

I felt that it was my duty to respond with an absolute dedication to my degree, to prove to myself that I deserved the scholarship; because there is a part of me that finds it difficult to accept money with such a personal attachment.

It reminds me of how paradoxical money is. It seems to be ever more present in almost every aspect of society, and yet we tend to always associate negative emotions with it; greed, jealousy, insecurity, and then there are the dividing lines it draws through our communities.

Yet with the help of the scholarship I felt something that had been a stark absence from my life beforehand. I felt like I had control over my own life. I had a sense of self security both financially, socially, and academically. More importantly I was building a future because I was at university.

And what an establishment Bath was. With a simply outstanding city moments away, which is one of the most desirable places to live in the country; the university was truly a fitting feature that everyone can be proud of.

Continuously ranked as one of the best places to study in the country, with an impressive academic record alongside amazing graduate prospects – that is why I chose to study at Bath and whilst there I felt at home in the city.

I am of course grateful to the donors, The Lisa May Foundation as it is their generosity that is responsible for everything I have been able to achieve to date.

Karl has now graduated with a Bachelor of Science Degree in Economics and has secured a job within the civil service as an economist, so from all of us at LMF well done Karl!


We are always looking for volunteers

Volunteers are a vital support network to charities like us. An hour, afternoon or day would go a long way! Please see details of volunteering opportunities here

Enter your email here to be kept up to date on news and events.

The Lisa May Foundation