Work carried out abroad so far…

We have been able to buy over 38 long tail boats for the region, which is a great achievement. This has really boosted morale and played a key role for the fishermen to provide for their families and communities.

Each and every one of our boats have been launched like this:

The monk chooses an auspicious day – he says prayers, throws holy water on the boat, ties some brightly coloured scarves around the post at the front of the boat and then the fishermen at great risk of getting burnt legs! Light the firecrackers and the deed is done!! Then the whole team pushes the boat in. 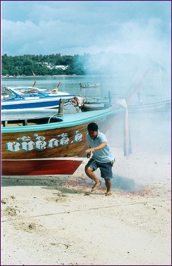 Mat has done a fantastic job in Thailand. He has been running three Phsysio Clinic in the region with amazing success. It’s been hard work and with the help of translators he has got the message across. The Thai people are very grateful and have loved the nutrition advice that Mat and his team have been able to give.

Every consultation has required a translator, a room to do the consult as well as time and patience. Many injured have been suffering in silence but now we really have seen impressive results. We are looking to continue this valuable project and with your continuous support we can.

In early October we set off from Birmingham>Dubai>Bangkok>Phuket>Khao Lak. After a couple of days we had a meeting with 2 local Thai Ladies (who were working on the beach front the morning of the tsunami) and a translator. The meeting went well and we were invited to view a potential room for the clinic, it was ideal for the purpose of what we needed it for. So we started that day. From the very beginning the hardest thing was obviously communicating clearly with the patients, although our translator was excellent. We gained their trust and made a difference from the very beginning and very quickly news spread that we was giving free treatment, the flood gates well and truly opened. We had about 30-40 patients per week and Emily and Hannah took a fitness class 2x per week in the evenings (which the whole community joined in and really enjoyed).

There were other volunteer groups were local to our work and they were also doing unbelievable work (mainly construction work) one foundation helped the Thai people make their own furniture from trees up rooted from the tsunami so we approached them to make us a treatment table which they did and it really was a god send.

The wave came in at Khao Lak at 12 metres in height and at 150 mph; it carried enormous boats weighing 20-30 tons in land as far as 2 miles and just simply dumped them. Hotels are still left smashed to pieces. Nearly every tree you come to has a picture of a face taped to it (from an 8 month old baby to 80 year old grand parents). Many still do not know what happened to their loved ones.

After speaking to the Tsunami Volunteer Centre (TVC) we discovered that many of the construction workers were there when the tsunami hit. Having spoken too many of the workers and listened to their personal stories, it was clear that they too were in need of our help. One girl and a man who came for treatment had both lost their partners to the wave and they also were seriously injured by the tsunami. Their wounds were infected and had to return home for surgery and rehabilitation. They found it difficult to settle and felt more comfortable in the place that they lost their partners, so we supplied them with the follow up treatment that they needed.

After 2 months we wrapped the clinic up and all of the patients had improved no end and were all happy to continue with their home exercise programs.

Shortly before finishing the clinic I received a phone call asking if we could travel to south of Phuket to assess an 11 year old boy, who had been in a coma for 2 weeks following a severe head injury. He had been left paralysed in his left side. He had little recovery but there were a couple signs that suggested that he had some kind of potential for some recovery. We all worked very hard with him and educated the family on matters of his positioning, handling and treatment.

We have had a 6 ft mirror made for him and have designed our own standing frame for him, which we have asked a local craftsman to make for him. He needs 2 AFO’s and a L extensor wrist splint now.

Just prior to coming home we were invited to a function at the British Embassy where we were thanked for our help with the post tsunami effort. It was a very memorable evening and something that I will never forget.

We are all now home but have had the most wonderful experience and would recommend others doing something similar. With the job situation in the UK being a little difficult for new graduates at present there are opportunities out there for people to gain invaluable experience not just in physiotherapy but also with life in general. 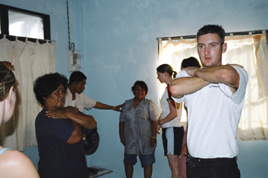 Some of your money has gone to Lam Kem School in Phang Nga to replace lost sports uniforms.

Forty children required tops, shorts and trainers. It has been very uplifting to see the psychological support a uniform can give – how it boosts morale and makes the children feel that things are returning to normal. The sports uniforms were given to the children at the time a senior delegation from The Prince of Wales International Business Leaders Forum was visiting.

We are working on a project with the schools and their rebuilding which I hope to have more information to pass on to you soon. We have been arranging days out for the children, ice cream and fun days to take their minds off what they have lost. It has been very effective and such a simple thing to do. 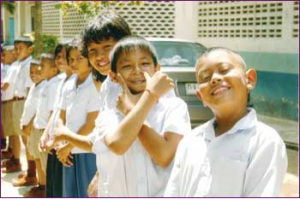 All this has been made possible thanks to your generous donations, so a big thank you to you all.

But the journey does not stop here, there are still many people and communities that need help and it’s with your support we can do this. The newspapers forget quickly, then so do we, but it’s vital we don’t. We have been able to give people back their dignity, their freedom, their ability to earn and feed their families. The smiles on their faces and joy in their eyes say it all. What a difference we can make.

The devastation in Burma brought back a lot of feelings, mainly helplessness. You’ll be glad to know that we have been helping out there, unfortunately we can’t mention any details as it could get the people involved in trouble.

Lisa loved children and she would do her best to help with time or money if she had it. Jackie one of Lisa’s best friends has been working with the street kids in Brazil. Jackie approached us to help re house an amazing family she had met that need our help. They were about to be made homeless and lived in fear everyday. Here is the letter I received from Jackie regarding the boys. 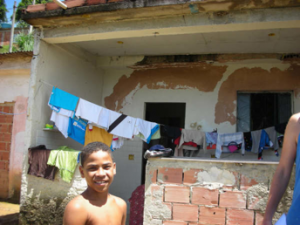 Went to visit the boys in their new home, which was brilliant.

I’ve attached some pics for you – it doesn’t look like much – but the new home has really transformed their lives. They were living in a far more dangerous inner city favela, which had drug problems and lots of traffic. Their mum had stopped working and Lucas (the eldest boy) had stopped going to school for over a year to look after her and the other 2 boys. As you already know, they were being kicked out of their old home and were imminently going to be living on the streets.

They are now living an hour outside the city, in a much quieter favela, which has no drug trafficking. It’s a really peaceful place, with a brilliant community spirit. They have been welcomed into the area, which is called ‘Morro Paraiso’ – the direct translation is ‘Paradise Hill’ – and they are all looking forward to the arrival of the new Community Centre next year.

The mum is now working full time and earning enough to provide food and clothes for them – which is fantastic. The boys are all attending a local private school, and were awarded a 50% scholarship. A volunteer friend Louis and a few of his friends are funding the remainder – it only costs around £350 for the year for all 3 of them!

They still have a long way to go – but this house has really given them a new start that was desperately needed – so thank you very much for your support. We really couldn’t have done this without you Nic!

My friend has given copies of the legal documents for the house to one of the other volunteers, so as soon as I get them, I will forward the copies to you.

Hope you are well. 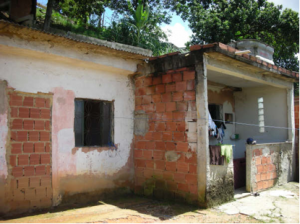 
We are always looking for volunteers

Volunteers are a vital support network to charities like us. An hour, afternoon or day would go a long way! Please see details of volunteering opportunities here

Enter your email here to be kept up to date on news and events.

The Lisa May Foundation